Today, on the 6th of August 2021, the Consultative Meeting of the Heads of States of Central Asia was held in the National Tourist Zone “Avaza”. The Special Representative of the UN Secretary-General for Central Asia, the Head of the UN Regional Center for Preventive Diplomacy for Central Asia Natalia Gherman also took part in the session.

The Consultative Meeting of the Heads of States of Central Asia was held in the Congress Hall of the National Tourist Zone “Avaza”. The event was preceded by the bilateral meetings of the heads of states. Then, the joint photographing ceremony of the Presidents of five Central Asian states took place.

In his opening speech, the President of Turkmenistan Gurbanguly Berdimuhamedov expressed gratitude to his colleagues for accepting the invitation to visit Turkmenistan for participation in the Consultative Meeting aimed at further strengthening regional cooperation, provision of conditions for more active and oriented steps in this regard, which is expected to become a strong mobilizing factor for effective and constructive participation of the Central Asian region to the continental and global affairs.

The parties considered the key aspects of developing political, trade-economic, and cultural-humanitarian collaboration between the countries of the region. A constructive exchange of views on the issues of regional stability was held. The Presidents discussed the pressing issues of regional cooperation, exchanged opinions on current topics of international development. They also agreed to accelerate the external policy cooperation, including through the regular five-sided meetings between the MFAs of the regions’ countries.

During the session, the Presidents discussed the issues related to the implementation of resolutions adopted at the Consultative Meeting of the Heads of States of Central Asia that was held in Tashkent on November 29, 2019. The parties noted the importance of the region from the geopolitical and geoeconomic perspectives and underlined the high level of mutual understanding, trust, and mutual respect between the countries that are united by the century’s long historical, spiritual, and cultural ties. It was emphasized that all of this is positively affecting not only the region but Eurasia in general.

Special attention was paid to the establishment of favorable conditions for the partnership in the energy sphere, expansion of cooperation between the region’s countries in the transport-communications field, in particular through the maintenance of effective functioning of available and by forming new transport corridors. In his speech, President Gurbanguly Berdimuhamedov said, “based on the UN documents, we are forming in Central Asia favorable political-legal and economic conditions for safe, sustainable partnership, which is oriented at the fulfillment of internal regional demand for energy carriers, as well as directed at the entrance to the world markets via the international transit corridors”.

The Presidents exchanged views on the development of trade ties, an increase of export and import operations. The agreements were reached on the diversification of mutual trade turnover and industrial cooperation.

One of the main constituents of the agenda of the meeting was the consolidation of efforts of the region’s countries on countering the pandemic.  The Presidents agreed to facilitate the organization and encourage joint research in the area of studying the nature of new type infections, as well as the application of new methods of treatment and prevention of communicable diseases.

Upon the outcomes of the meeting, the Joint Statement of the Heads of States of Central Asia was adopted.

Then, an official ceremony of awarding the Honorable Sign of the Heads of States of Central Asia was held.  In accordance with the decision of the Presidents of the countries of Central Asia adopted at the current Consultative Meeting, the Honorable Sign was awarded to the President of the Republic of Tajikistan Emomali Rahmon for outstanding achievements in the development of friendship, good-neighborliness, mutual understanding, and cooperation between the states of Central Asia, as well as for strengthening peace and security in the region, promotion of joint interests and initiatives of the region’s countries within the international community.  With the applause of the audience, the Honorable Sign was awarded by the President of Turkmenistan Gurbanguly Berdimuhamedov. 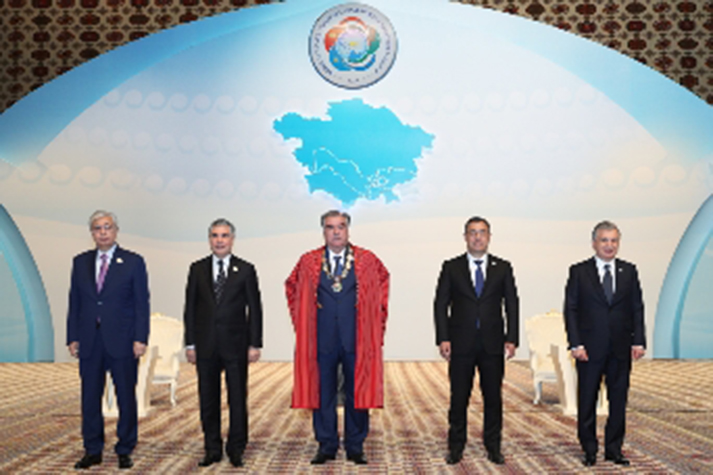 Then the press conference of the Minister of Foreign Affairs of Turkmenistan Rashid Meredov and the Special Representative of the UN Secretary General for Central Asia, the Head of the UN Regional Center for Preventive Diplomacy for Central Asia Natalia Gherman took place upon the outcomes of the Consultative Meeting of the Heads of States of Central Asia.

In the end of the day, the heads of states took part in the festive concert of the art and culture workers of the countries of Central Asia, as well as in the official dinner.

A MEETING OF THE MINISTERS OF FOREIGN AFFAIRS OF THE ORGANIZATION OF T...

MEETING OF THE MINISTER OF FOREIGN AFFAIRS OF TURKMENISTAN WITH THE AM...

THE PRESIDENT OF TURKMENISTAN HAS SENT A LETTER OF CONDOLENCES TO THE...

TELEPHONE CONVERSATION BETWEEN THE MINISTERS OF FOREIGN AFFAIRS OF TUR...

VISIT OF THE GOVERNMENT DELEGATION OF TURKMENISTAN TO IRAN

THE GOVERNMENT DELEGATION OF TURKMENISTAN DISCUSSED PRIORITY ISSUES OF...