On July 14, 2022, the President of Turkmenistan left for a two-day state visit to the Republic of Uzbekistan.

Having made a flight to Tashkent, the presidential airliner landed at the Islam Karimov International Airport.

At the airstairs of the plane, President Serdar Berdimuhamedov was warmly and cordially welcomed by the Prime Minister of the Republic of Uzbekistan Abdulla Aripov, as well as other officials and members of the government delegation of Turkmenistan.

Then the motorcade of the head of Turkmenistan from the airport headed to the park "Yangi Uzbekistan". Here, President Serdar Berdimuhamedov was met by officials of the neighboring state, as well as members of the government delegation of Turkmenistan.

The head of Turkmenistan laid a wreath at the Independence Monument.

Then the motorcade of President Serdar Berdimuhamedov headed to the State Residence "Kuksaroy".

In the afternoon, the motorcade of the head of Turkmenistan proceeded to the Kuksaroy Palace. Here, at the main entrance, the distinguished guest was warmly and cordially welcomed by the Uzbek leader.

At the end of the official meeting ceremony, the leaders of the two countries proceeded to the Kuksaroy Palace. After the official joint photographing against the background of the State flags of Turkmenistan and the Republic of Uzbekistan, bilateral negotiations took place at the highest level. 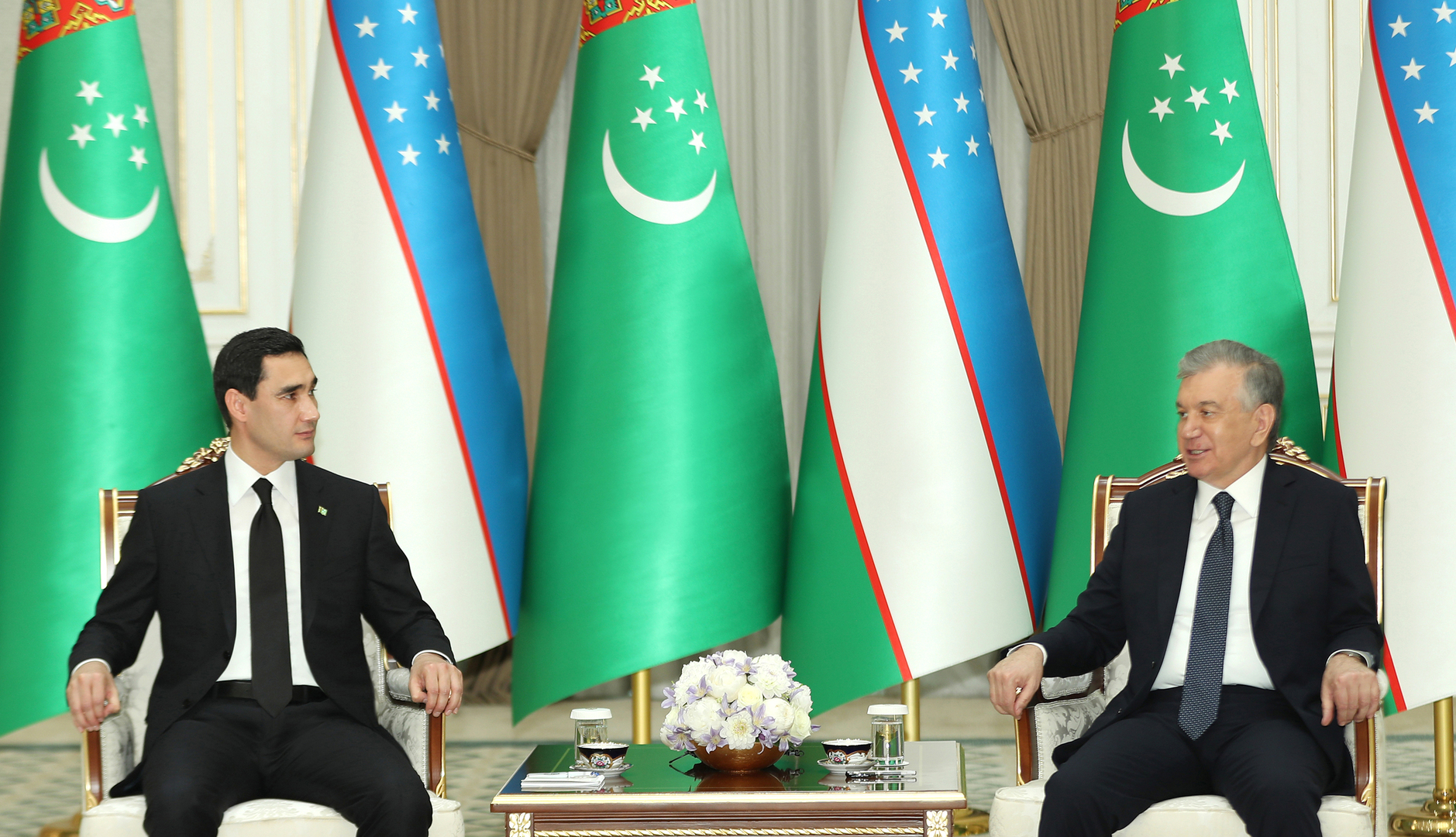 Thanking the leader of the friendly country for the invitation to pay a state visit to Uzbekistan and the hospitality and warm welcome, President Serdar Berdimuhamedov noted that this would further strengthen ties, ensure the continuity of historical brotherhood, good neighborliness, common goals and objectives today and in the future.

Further, the negotiations continued in an expanded format, with the participation of members of the official delegations of Turkmenistan and the Republic of Uzbekistan.

Once again cordially welcoming the distinguished guest and members of the Turkmen delegation to the Uzbek land, President Shavkat Mirziyoyev noted that common historical roots and religion, similarity of languages, culture and traditions are a solid basis for Uzbek-Turkmen interaction.

Taking the opportunity, President Shavkat Mirziyoyev thanked the Turkmen side for its active participation in supporting the recently adopted resolution of the UN General Assembly at the initiative of Uzbekistan on strengthening the interconnectedness between Central and South Asia.

Speaking then, President Serdar Berdimuhamedov thanked the President of the Republic of Uzbekistan on behalf of the delegation of Turkmenistan for the warm welcome and hospitality, the high organization of the current meeting.

This is my first state visit to Uzbekistan, the head of state said, noting that he considers it as the most important, milestone event in relations between the two countries. Our main goal today is to strengthen the bonds of brotherhood, good neighborliness and mutual understanding, develop and expand bilateral cooperation in all areas, President Serdar Berdimuhamedov emphasized.

At the end of the talks in an expanded format, bilateral documents were signed in the presence of the heads of state.

To the applause of those present, President of Turkmenistan Serdar Berdimuhamedov and President of the Republic of Uzbekistan Shavkat Mirziyoyev put their signatures under the Joint Statement. 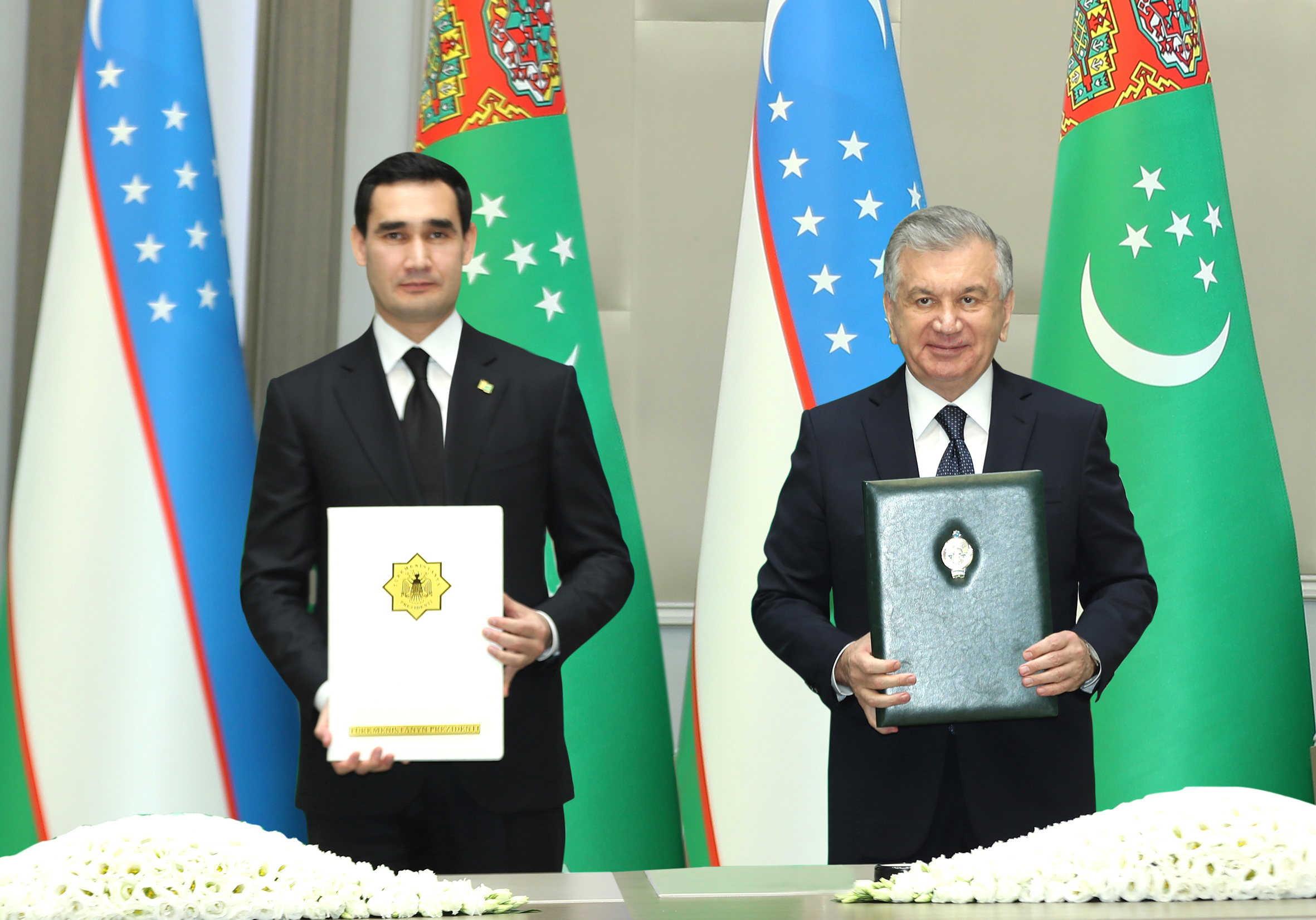 At the end of the document signing ceremony, the heads of the two states addressed the media representatives.

As noted, during the current summit meeting, the heads of the two states discussed in detail all topical issues on the bilateral agenda, exchanged assessments of the current state of cooperation and stated great progress.

After exchanging views on a wide range of issues, the parties agreed to adopt for the first time the Roadmap in the implementation of the agreements reached.

In the evening, the head of state, according to the established tradition, planted a tree on the Alley of Honored Guests, located on the territory of the State Residence "Kuksaroy".

Upon completion of planting a sapling of a young tree, an official dinner was given in the Palace "Kuksaroy" on behalf of the head of the Republic of Uzbekistan in honor of the President of Turkmenistan.

TURKMENISTAN AND THE UNITED ARAB EMIRATES DISCUSSED PROMISING AREAS OF...

IMPORTANT EVENTS TOOK PLACE WITHIN THE FRAMEWORK OF THE INTERNATIONAL...

TURKMENISTAN'S INITIATIVES HAVE OPENED UP NEW OPPORTUNITIES FOR INTERN...